Last night a turtle laid eggs by two of our lounge chairs that were on the beach up against our seawall. The ‘turtle people’ and the police have asked us not to move those lounge chairs that are inside the taped area where the nest was laid. I have attached a photo so you can clearly see which two lounge chairs we are not allowed to move.  Thank you.

Recap of May 7 Meeting for County Sewer Project

As most of you know, Town officials met on Tuesday, May 7, with representatives from Broward County and Lanzo Construction regarding the on-going sewer replacement project. The meeting summary below was delayed, as several discussion points required additional clarification.

Thank you to the many residents who attended the meeting for participating in the discussion in a reasonable and courteous manner. Town Hall was filled to capacity and then some. I’d especially like to thank Town Manager Serda for organizing the meeting, and Town Clerk Henderson for providing extra administrative support. Thanks also to Chief Nagy and his vigilant Police Officers for their protection and assistance under trying conditions.

Because of the efforts of many, the County has agreed to the following requests  . . .

1. Improve Paving and Manhole Visibility – In the south end from Ocean Grande to the Inlet Bridge, the sewer main has now been completely replaced, but the manholes are 2” to 3” above grade and there is uneven pavement everywhere. Because this area still requires underground testing, connections, etc. as the project progresses, the County had been planning to leave the road as is until the very end of the project and then re-pave the whole road at once. They have agreed, however, to even out the southern portion of Town NOW. Although final paving cannot yet be done, a more even driving surface will be provided in the interim. This work will be done next week. In the meantime, immediately following Tuesday’s meeting, the manholes were circled with fluorescent paint to make them more visible.

2. Reinstitute Red Light Traffic Arms & Better Lighting – Currently workers holding STOP signs are being used for traffic control for the one-lane closure section in the center of Town from 1063 to 1087. However, the workers and signs are not visible enough, especially at night. In addition, there is a long stretch of driveways where there is no indication of which direction traffic is coming from as people leave their homes. The County and the Contractor have agreed that traffic arms with red lights will be reinstituted as soon as the single-lane closure is a short enough distance to provide a sight-line between the arms. In the meantime, the Contractor will provide better lighting at the entrance to the single-lane area and add more workers along the single-lane closure.

3. Keep Vehicles AND Cyclists from Construction Zone –  The County, the Contractor, and the Town’s Police Department will redouble efforts to keep THRU TRAFFIC out of the construction zone. NO THRU TRAFFIC means vehicles AND bicycles.

4. Extend Hours for Work Crews – The County and the Contractor agreed to have crews work 7:00am – 7:00pm Monday through Saturday until the project is complete.

5. Enforce Workers’ Vehicles Parking Rules – Regarding construction workers’ vehicles, the Contractor agreed to better enforcement for keeping workers’ vehicles in the pre-approved designated parking area at the Dezer (previously Kennelly) property, instead of allowing workers to park in the construction areas and/or on private property.

6. Improve Communication About What to Expect and When –  The County has agreed to post a timeline on the website https://hillsboromilesewerinfo.com/ in the form of a map of the Town with dates and addresses showing the project’s progression. Obviously, the dates can change if the crews run into something unexpected underground or if there is unusual weather like a hurricane or higher than normal rainfall. This map with dates and addresses will replace the generic map currently on the website since the generic map doesn’t provide any real information.

7. Reduce Full-Road Closure from 21 to 8 Weeks – The project has 21 weeks remaining. The County and the Contractor have agreed there will be a full closure for only eight of those weeks – four weeks at each of the two remaining lift stations. We were emphatically told there is no way around having a full road-closure for four weeks at each lift station. There are five lift stations in the system. Three of these have already been done, with the one in front of Town Hall (1210) and the one at 1121 to go. The work pits at the lift stations span A1A, leaving no safely supported roadway to travel on (see photo below showing the hollowed area underneath the cones.) The pit in front of Town Hall was opened on May 7 and should be finished by the week of June 3. The last full closure, which will be at 1121, will be during June/July when the population is at its lowest. For the dates between these full closures, passage should be possible all the way through Town. Also after the 1121 lift station is complete until the end of the project, we will have egress both north and south. 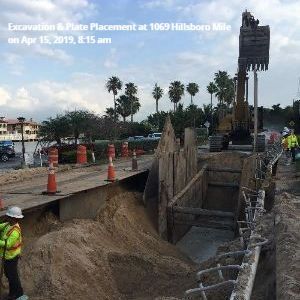 To recap, the project is on schedule to be “substantially complete” by the end of September. Full closures are necessary and non-negotiable for eight of the remaining 21 weeks. The month of October will be devoted to “punch list” items, but should have little impact on traffic flow.

As the Commission’s liaison with the County for this project, Vice Mayor Irene Kirdahy reminded everyone at the meeting that this project is an absolute necessity. We have had a number of sewer breaks in the past few years, and as evidenced by the condition of the old pipe coming out of the ground, the current system was failing. Should a major sewer break occur releasing large amounts of raw sewage, our properties could be condemned, forcing us to evacuate. This would obviously be worse than dealing with the detours.

We are more than 7/12 of the way through this monster, year-long  project. Nerves are frayed and patience is running thin, but we need to look beyond the current situation. We need to stay considerate of one another as we wait our turns to pass through the active construction areas, and we also need to be considerate of the men and women working on the job site. We are fortunate to have a highly educated population here in Town, and with only a few exceptions, people understand the reality of the situation. Thank you for hanging in there. 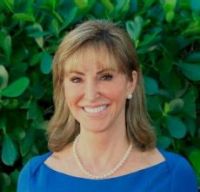 I typically send email blasts only in urgent situations. In my opinion, the sewer project has become an urgent issue, and . . .

Your Input Is Appreciated

Since the construction began at Town Hall last week, the number of email complaints I have received has become too numerous for me to respond to individually. On Tuesday, May 7 at 9:00 AM, there will be a Commission meeting held at Town Hall. Representatives from Broward County will be in attendance. Prior to the sewer discussion, there will be brief presentations from DOT and FPL regarding A1A. I expect the sewer discussion to begin no sooner than 9:30.

Please consider attending this important meeting if your schedule allows. Access to Town Hall (1210 Hillsboro Mile) will be available from both the north and the south for the meeting, but no through-traffic will be permitted. Parking will be an issue, so please work with your neighbors to carpool.

Complete Road Closure Is Not Just an Inconvenience

It is important for the Sewer Project Managers to hear directly from residents whose lives are being impacted so dramatically. Hopefully, some form of creative relief for residents can be agreed upon. While we appreciate the fact that the County is replacing the Town’s sewer lines, residents must have reasonable access and egress on and off the island during the process. What started as a project with a single-lane closure quickly became a project with a moving full-road closure. In addition, work is now being done in multiple areas simultaneously. Re-paving was supposed to take place as soon as sections of road were finished. This has not happened. Rather, the entire town has become a war zone with multiple safety issues in various areas.

I believe it’s time to regroup, and your input/attendance at Tuesday’s meeting could be helpful. Please share this message with your friends and neighbors who may not yet be on my email list.